If you want to be healthy you should forget about doctors!

For people with technical mind set, for those that have to work with modern technology devices every day, the advice that you should read the instruction manual if all your attempts to make something work failed can be very useful.

The same can be recommended to anyone who wants to finally stop the chain of sicknesses, everyday problems and failures in business. You may ask, where one should look for that kind of instruction manual? Our experience shows that it could be found in the fourth dimension, in the dimension of linear time and cause and effect connections.

It is known for a long time that if a problem appeared on one level, the solution is on the other level. The same thing happens with health of any given person.

Modern medicine only registers and tries to mechanically solve pathology of body organs or damaged metabolism in the human body. This way of treatment of the effects is similar to scooping water from a sinking boat and often it is done using a sieve. For the sake of justice I have to say that traditional medicine theory is not physically capable to do more. It is so simply because it takes the forceful external treatment as the foundation. It distrusts the reserves of the human organism, which uses only three percent of the brain resources.

This kind of tradition in medicine as a whole connects the injured to the “experts”. The “experts” deafen the certain symptoms and make the client’s wallets much lighter by making them buy stronger medicine each time they turn to them.

If one doesn’t know and doesn’t remove TRUE causes of the sicknesses and just tries to lessen the symptoms of it, then the harm to the gene pool deepens. It happens simply because the person’s brain loses its sensitivity and stops screaming for help.

What about animals? how do they survive in the natural environment without the help of the modern “doctor House”? Actually, they content themselves with natural qualities of the organism which is directed by the brain. If any malfunction happens in nature and an animal gets sick, and perhaps even dies, then the life experience of that animal is left in the fourth dimension to warn the descendants of the species.

A human just like any animal has an organism that has the control system of vital functions. The system is autonomous from the mind but is controlled by it. There is a difference between people and the majority of animal species. Humans have individual and non-collective body of fourth dimension – the soul.

The soul can be pictured as a spinning top that grows from the point of conception of the organism in the direction of TIME flow. The diameter of the “single moment” cut of the spinning top shows the reserve of brain life forces at the subject’s given moment of life time.

There is an opportunity to recreate this characteristic using the results of research using devices or through the pattern of the eye iris of a human. Longitudinal configuration of the surface is just like the surface of the record groove on the vinyl record. It describes the events in life of an individual when there is movement along the record groove. This is the tunnel that people talk about when they live through horrible stress or state of clinical death. This is called – the body of cause and effect or KARMIC body. These are the bodies that psychics can see. Telepathists, energy informational healers and surgeon healers from Philippines work with these bodies.

The invention of X-ray equipment and ultrasound allowed to discover the causes of health problems and to set the course of medical treatment without cutting the flash. Ability to define parameters of thinner dimension matters allows to discover and eliminate the causes of hardships on the road of life of a person, eliminate diseases that are passed on through the genetic family, adjust the character and so on. ..

The use of science in the higher dimension allowed to define the causes of many sicknesses. It gave a chance to look at it with a new look. It was discovered that diabetes, asthma, allergies, chronic fatigue syndrome, AIDS, mad cow disease, infertility, impotence, tuberculosis, alcoholism and many other diseases are 90% energy informational injuries and only 10% of them have material nature. This explains failure of treatment using medical drugs. 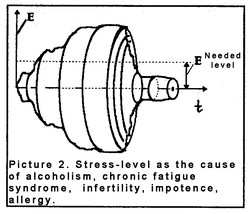 At the same time, the experts that work with karma have an opportunity to mobilize “in principle” the “spiritual” component of a human toward the normal health. They can teach “the brain” how to avoid ABSOLUTELY PERSONAL problems that have typical indications and are called sicknesses.

Further support of healthy state of the brain is done automatically based on the individual experience of avoiding crisis. This is the way through which the immunity towards the new injuring artificial factors is formed.

Medical drugs cannot do this in principle. They can only play a supporting role.

Of course we are talking about the cases when there is still time and the personality of a human is not degraded. In other cases the lead is given to the surgeon’s scalpel and surgery and medical drugs are the only means that allow the ORGANISM to live if it is still possible.

People can end the line of problems. He or she needs to acquire the culture on how to use the brain in the fourth and higher dimensions. Not knowing the laws does not free from the responsibility of following them. Sicknesses are “F…kups” in the individual school of life. By the way, these “F…kups” are transferred to descendants in genetic problems or stereotypical behaviors.

The most reassuring thing here is the fact that anyone who does not have physical brain damage can become free and healthy. This is the behest of modern life and the pass towards tomorrow. By learning how to use the resources of your own brain you can correctly and truly transform from just a biological being to the thinking and wise being. Right now the term “homo sapiens” is a compliment!

It is possible to describe only a small bit in this article. Wide scale research was done on this topic. This research was started by us during Soviet Union times and it still goes on. However, the mark “X-files” did not burry the results of our work. There are a lot of short term seminars for directors, trainings for experts and individual consultations on this perspective for science and technology topic.

THIS IS THE RAY OF LIGHT IN STILL DARK KINGDOM!